If you would like an outdoor and active way of using your talents, have an interest in history and a desire ‘to serve King and Country’ this could be for you!

The 32nd (Cornwall) Regiment of Foot is now seeking to recruit musical volunteers into its ranks to form its own Fife and Drum Band.

We are a friendly and keen group of historical ‘Re enactors’ based in the South West who seek to portray a section of British Infantry as they would have appeared during the Napoleonic wars. We attend events throughout the UK and abroad – including Waterloo, Spain and Ireland. We dress in the splendid uniforms of the period, sleep in canvas tents and cook our meals over open fires and generally have great fun – away from the stresses of modern life! 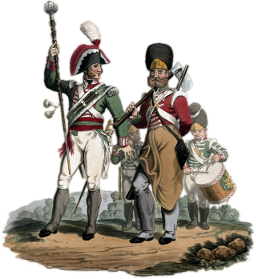 As a drummer you would play a rope tension side drum with calf skin heads, as a Fifer – a keyless small flute or ‘Fife’. The music will be mainly marching tempo period tunes.

If interested – you would ideally need to have had some experience as a drummer or flautist, be over 18 unless accompanied by a parent or guardian, and physically able to march and play your instrument .

For more details please contact us and we will get back to you to discuss or answer any questions.