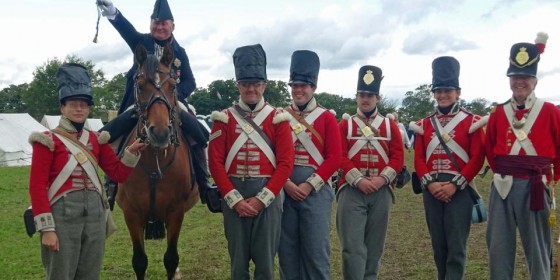 The multi-era event at Spetchley Park has been a favourite occasion for the 32nd Regiment in recent years, with the majority planning to attend in 2019. However the weather gods, clearly upset at the way we overcame the storms at Whitington Castle earlier in the 2019 campaign, decided to throw a whole lot more rain and gusty gale-force winds at us on this occasion as well. For understandable reasons a number of the team were forced to withdraw but a brave and hardy core of Wendy, Eleanor, Sophie, Trevor, Nigel, Kevin, James, Lee and Bob still made it to Spetchley to represent the 32nd  Regiment and to beat whatever challenges the weather gods and the French might throw at us.

Fighting alongside us were a number of our established 1st Brigade friends (including 2nd Queens, Coldstream Guards, 33rd, 41st, 2/95th & 5/60th) plus a number of 2nd Brigade Regiments, RHA and some Prussian and Russian allies.

Saturday’s agenda had a very familiar ring to it – Officer’s meeting at 09:00, Living History in our camp from 10:00, Brigade drill at 11.00, skirmish with the French in the main arena at 14:30 (French to win ‘cos it’s Saturday!) and a closing multi-era parade at 16:30. The greatest challenge was to achieve all this in winds gusting to 50 mph and with heavy squally showers – but we managed it all!

Following the morning’s drill in greatcoat and capcover order, we took to the battlefield in the afternoon dressed in our resplendent redcoats assured that the French numbers were pitifully small. Unfortunately it became very clear, very quickly, that the intelligence received was totally flawed and that we were suddenly faced with a more than significant and well organised enemy force. This unexpected turn of events led to yet another ignominious Saturday afternoon defeat! As for the 32nd there are few left to tell the tale – many of our firers were killed either by French cannon fire or cut down during the last dramatic advance by the French troops. Fortunately the Colour was successfully saved from capture following a strategic withdrawal by the Colour Party and it was then left to our Ensign to carry the news of the Regiment’s and Brigade’s demise back to a devastated group of camp followers!

An evening of ‘soul-searching’ followed with much debate about the events of the day over another excellent meal, followed by much ‘drowning of sorrows’ in the Spetchley taverns.

A slightly better dawn greeted the 32nd on Sunday morning as the camp began to stir, fires lit and breakfast cooked – but the threat of windy and rain remained. Strong medicine had clearly been available the previous evening as suddenly we were back to full strength and all raring to make up for losing out to the French the previous day.

Despite the dark and threatening clouds Brigade drill became more focused and, following this, the veterans of so many Peninsular battles drew on all those years of experience and marched expectantly to the battlefield. This time a reinvigorated allied army caught the French napping and swept them aside, cheered on by a significantly larger crowd than had been present on the Saturday. Once more the afternoon was completed with a colourful parade of a dozen or more groups of multi-era re-enactors from Roman times to World War 2. It was then time, still accompanied by annoying rain showers to break camp, bid our farewells and head south to our respective homes.

Another eventful and challenging weekend made enjoyable by such a great and special regimental team working so hard together – although particular thanks are due to both Kevin and Wendy who took on the prime ‘victualling’ responsibilities in such difficult circumstances.

Also a special mention to Sophie and Lee who survived and contributed so much to their first full event with the 32nd, stood firm’ under ‘French fire’ (and the weather) and appeared to go away weary but enthused for next time.