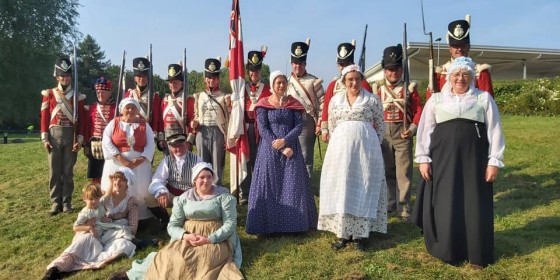 And finally, after two long years, an opportunity to set up camp and go under canvas for a weekend event – the Georgian themed Wimborne History Festival which was organised around a number of locations around the town centre of Wimborne Minster, Dorset.

The Regiment gradually assembled on the Friday afternoon / evening and after a couple of “how did we used to put this tent up?” moments, memories recovered and the 32nd Regiment were back in action, functioning again as an effective team and preparing to meet our ‘adoring’ public!

As with the one-day St Austell event in August, this was an event to which the 32nd Regiment had been invited and was being paid to attend. It was therefore important that we had a ‘good turnout’ as well as putting on a ‘good show’. As always, the 32nd responded positively to the challenges and we were brilliantly represented by Trevor, Bob, Keith, John, Nicky and William, Andy, Wendy, Nigel, Philip, Louise, Bryn, James, Eleanor, Lee and Sophie – together with very welcome guests Adrian, Kate and Heather.

Also at the event, representing the ‘Napoleonics’, were our friends from the 2/95th who were encamped nearby at the other end of ‘Willow Walk’ from the 32nd. Unfortunately, to the chagrin of our Colonel, there were no French to fight and defeat – and so we were able to prepare ourselves for a calmer weekend of ‘Living History’, demonstrating how our Regiment lived and survived 200+ years ago and answering a whole variety of questions that the public visiting our camp came up with. This was then interspersed with drill and firing sessions (2 each day) in the Willow Bank arena together with two impromptu and humorous ‘Taking the King’s Shilling’ recruiting events – the latter being undertaken together with the 2/95th and greatly appreciated and enjoyed by the audiences and participants alike.

Earlier in the week the weather forecast had been somewhat in doubt but, after a Friday night catching up on old times and remembering how to sup port (and other intoxicating liquors) from pewter tankards, Saturday morning dawned cloudy at first but then got sunnier and hotter as the weekend progressed.

Before we knew it, it was 17:00 on Sunday and time to break camp and journey home. A truly excellent weekend with particular thanks to Wendy (despite her back) and Nigel as ‘organisers-in-chief’, and to all the 32nd team for their amazing contributions, friendship and support – whether in-camp, in the arena or in the local hostelries of Wimborne Minster.