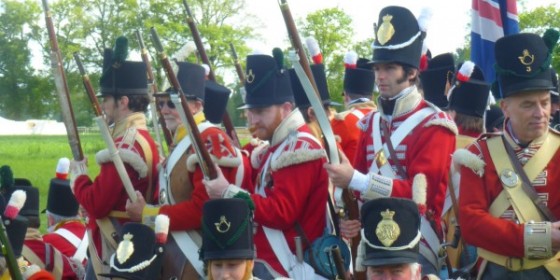 In January 1814, during a particularly freezing Flanders winter, Napoleon Bonaparte and his allied enemies fought bitterly in the streets and fields of the old Belgian town of Hoogstraten. After three days, and heavy casualties on both sides, Napoleon’s forces were in speedy retreat to Antwerp.

One recent commemorative volume describes these events as ‘The Forgotten Battle’, but for we four intrepid travellers representing the Cornish 32nd Regiment of Foot Hoogstraten 1814/2014 is an event we will never forget!

After a rather epic journey from deepest Cornwall to the Dutch/Belgian borders we arrived (after the warm-up battles of firearms customs and the Antwerp ring road), much heartened by chocolate waffles in Bruges along the way.

Flat, dusty and beautiful, the battlefield and bivouac were already busy and excitable, with merry-making and greeting of friends. Events were upon us immediately with a torchlit procession to the town, which led along the old military highway the town is named after to the town hall. Speeches were made by local officials and local regiments fired in honour, much to the delight of the hundreds of spectators lining the streets and cheering from their upstairs windows.

We were awestruck with the sheer number of reenactors taking part, totalling just short of a thousand, and there was a very real sense that this was incredibly important for the town, as well as the modern Napoleonic community. Tired and happy, attention soon turned to chips, beer, and a well earned sit down!

Back at the bivouac there was great camaraderie across all sectors and incredible effort by all towards authenticity. This was made complete by the many women, children, cavalry horses, a scattering of dogs and two stuffed pheasants. For me, two little boys in traditional Dutch clogs chasing each other through the straw with pretend wooden muskets did as much to cement the period as the battles and uniforms. It was a camp with a living, family feel, topped off with a wonderful, if dangerously tempting, historic market, and a rustic, well stocked bar and local food. We were all sincerely sorry to leave. Our warmest thanks to our fellow section members Vince, Josie and Co. of the 30th Cambridgeshire for their marvellous company, fire, and gigantically proportioned kettle!

The troops were quite rightly drilled daily and vigorously, in preparation for the huge battle each afternoon. Billed as the greatest reenactment so far seen in Flanders, the spectators are rumoured to have reached some fifteen thousand, complete with a strong media presence, some of which was flying above our heads! The awareness of the importance of what we were doing ne’er left us and the battles, though dynamic and often amusing, were reenacted with respect and rememberance to those who went before.

Both canon (at least one original) and cavalry were notably strong in both numbers and volume, and the noise was immense! Several times the troops were ordered to form square as the cavalry thundered within a whisker of us. One of Napoleon’s impressively adorned red lancers soon fell at the hands of the Highlanders, dragged screaming from her horse, sword drawn, by her ankles for a good tickling.

In the first battle we took the bridge and stormed the French stronghold, but the second saw us fall (in more ways than one given the ditches and lumpy ground) to Boney’s forces, after much hand to hand combat. The 32nd’s slick drill and speed of firing was commented on more than once, and we are making great strides! A thoroughly good time was had by all, particularly by Pvt. Jake who celebrated storming an artillery piece with an amorous embrace in the arms of a French wench (Pvt. Danning was unfortunately lost in close combat along the way. Pvt. O’Reilly was assisted after injury by the battalion’s water carrier, and went on to continue in the action) and events were further commemorated by a church service in the town.

Bivouac nightlife was rowdy and atmospheric, made all the more enjoyable by the Irish dancing antics of several 95th riflemen, and the collected bawdy songs of almost a thousand reenactors from far and wide. We raised a glass, or three, of the appropriately named Waterloo Brown to celebrate a thoroughly fantastic weekend and all those yet to come. Huzzar!

A huge thank you to our Marvellous Miss Edwards (Pvt. Jake) for organising the trip, and us, and to our soon to return Sergeant for your encouragement, guidance and for keeping us on our toes! We also greatly enjoyed, as always, the highly knowledgeable company of Paul ‘Eddie’ Edwards, who joined us for the majority of our journey. Great to have you with us Sir.

See all of our photos from this event in our gallery