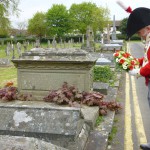 So onto Wollaton Park in Nottingham for the ‘Battle of the Nations’, our last NA event before we head for Belgium in June for that major confrontation with Napoleon Bonaparte – the exiled ‘upstart’ whose escape from Elba was reported in February 1815.The route from Cornwall to Nottingham took us close to Cheltenham where we took the opportunity to visit the grave and mark the memory of our Ensign who carried and defended the 32nd’s Regimental Colour at Waterloo. Ten members of the team were present in Nottingham – led again by ‘The Colonel’, the 32nd Regiment was also represented by Wendy, Nichola, ’Super Sue’, Adam, ‘David the younger’, ‘Dave the not so young’, Nigel, John and Bob. 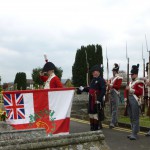 Our Ensign John Birtwhistle who carried the Regimental Colour at Waterloo was severely wounded during that battle in 1815 but eventually recovered from his wounds and was able to rejoin the Regiment with whom he subsequently enjoyed a long and successful military career. He died and was buried in Cheltenham in 1867 aged 75 having achieved the rank of Major-General. As a mark of respect our 32nd colour party laid a wreath on his grave, gave ‘General Salute’ and sounded the ‘Last Post’ during which the Colour was ‘dipped’. This event was very poignant, particularly for our current Ensign – a direct relative of the Major General – and for whom it was a privilege to lay the wreath and lead the salute. Also many thanks to Paul who was also with us on this occasion to skilfully sound the ‘Last Post’ on his bugle – again very moving.

We arrived in Nottingham just as the rain began to fall. Saturday night was cold and damp with heavy rain from the early hours of Sunday through to late morning. Sunday afternoon saw a dramatic improvement which then held through until our eventual departure on the Monday evening. 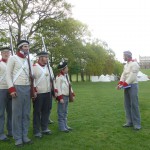 Sunday and Monday agendas followed a traditional NA format with Regimental and Brigade drill during the morning of each day and an opportunity to battle / skirmish with our French foe in the afternoon. In addition, on the Sunday, we paraded and were formally inspected as a full army – all five Brigades being represented at the Wollaton event. The highlight of the drill session on the Monday was a rather ambitious “forming of a 4 rank square” – a format which really required twice as many soldiers to complete as were actually on parade. It was however achieved – albeit very claustrophobic for the colour party and officers in the centre!

Sunday afternoon will probably go down as one of the greatest debacles in British military history. At the risk of court-martial, one has to question the awareness and competence of our heavily braided staff officers for allowing us to get so blatantly out-manoeuvred by a smaller army in so short a time. All the British Regiments and their allies, including 32nd, suffered heavy casualties but somehow the Colour parties managed to extract themselves with no Colour lost. The potential benefit of so many casualties amongst the 32nd could have meant more of Sue’s scrumptious ‘drop scones’ for each of the survivors – unfortunately this did not materialise as with the wonders of medical science they all came back to life again!

Clearly the heavy heads and deep yawns on Monday morning were clear evidence that our officers and men had worked long into the night to analyse tactics and learn the lessons from their earlier defeat. As a result, that afternoon saw a crushing defeat for the French, in front of a large crowd of on-lookers and the spectacular setting of Wollaton Hall 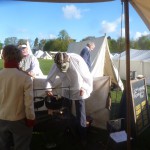 Overall, another great weekend with some excellent experience ahead of our meeting next month with Napoleon at Waterloo. Many thanks to all who made it happen – once more Sue was a ‘star’ keeping us so well-victualled and finding time to regale the stories of a camp follower to any visitor who would listen. ‘David the younger’ was singled out and commended on the battlefield by Lord Wellington himself and Nigel participating in his first full event found himself a true veteran by the end of the Battle

See photos from the Military Salute at Cheltenham

See photos from Battle of the Nations 2015