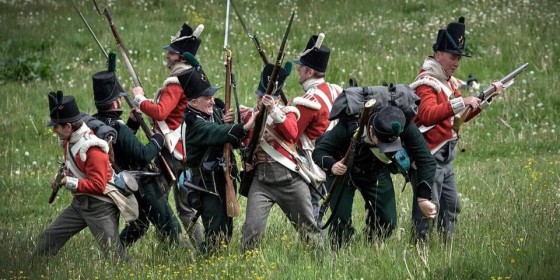 Dunster Castle, a former motte and bailey castle sitting high above the village of Dunster on the north Somerset / Devon border, is an inspirational venue for a weekend of ‘living history’, drill displays and skirmishes to show off the life of Wellington’s Army in Napoleonic times.  This was the first such event organised at this National Trust property, but hopefully signalling further events in this part of the country. The 3rd/95th Rifles Regiment, including the RHA, were responsible for organising the event and they, very kindly, invited the 32nd Cornwall Regiment to join them in this ancient and most dramatic of rural environments.

During the Napoleonic era venues such as Dunster Castle, then owned by the Luttrell family, were used as bases from which Lord Wellington’s Regiments recruited and trained, with desperate urgency, to reinforce our much stretched army in the Peninsular who were fighting for the very freedoms we enjoy today. On this particular occasion it is rumoured that a band of French soldiers have recently landed on the ‘Summerset’ coast line, when their troop transport went aground after bad weather. They have been raiding small homesteads and pillaging whatever they can get their hands on. The Brigade currently being ‘entertained’ at Dunster have assured the local authorities that they will provide protection to the local lands and interests – so they are liable to be called to arms at a moment’s notice in response to pleas/reports of any strange goings on or villainous looking characters in the Dunster area.

Arriving Friday evening, the 32nd were represented by Wendy, Nicky & John (plus William), Trevor, Nigel, Andy, James and Bob – and subsequently reinforced on Saturday evening with the arrival of Kevin and Mark. After a relatively short Friday night which included an initial foray into some of the Dunster hostelries (in search of potential recruits!).

Saturday dawned dry and bright. An excellent breakfast, prepared by the 3rd/95th and eaten with castles walls and defences towering over our camp, was a magical way to start the day.  Corporal Danning soon called the Regiment into action with some stiff drill, both to remove any ‘cobwebs’ and to prepare for the day ahead – but we then received a request from the 3rd/95th to assist them in the search & apprehension of two deserters from their Regiment.  Responding quickly to this request it was troops from the 32nd who soon spotted the two ‘traitors’ and caused them to be captured and returned to camp for their deserved flogging.  With the local population now exploring the castle and its grounds in some numbers, It was a quick change from ‘fatigues’ into ‘full dress’ ready for a drill and firing display, alongside the Rifles – and again in front of those evocative Castle walls. The watching crowd greatly appreciated the ‘slick’ performance provided by both Regiments which also set the tone for the subsequent skirmish against the French invaders later that afternoon.

Marching down from the Castle into the surrounding fields the Regiment was drawn into the defence of the RHA unit and their cannon against a strong band of brigands who attacked mercilessly from various directions, simultaneously. First the artillery was lost then the 32nd was caught in strong crossfire, outflanked and all those on the field, including our Ensign, succumbed. Fortunately, the Regimental Colour had been left in camp and so remained safe!

After another splendid meal hosted by the 3rd/95th, it was again time to visit local hostelries in search of new recruits. Much fireside thought and effort was also given to developing strategies and plans to prevent any repeat of that afternoon’s skirmish debacle. Clearly all this effort came to fruition on Sunday with more deserters tracked down, more slick drill & firing and a full victory ‘on the field’. Inspired both by the presence of the Colour and an enthusiastic crowd, the 32nd took some early casualties but this time protected the artillery from capture and in a final blood-curdling bayonet charge put the enemy to the sword!

It was then time to break camp and journey home – content in the knowledge that we had once again fought for King & Country. Another excellent weekend with particular thanks, once more, to Wendy as ‘organiser-in-chief’, to the 3rd/95th for the invitation and their fantastic hospitality – and to all the 32nd team for their amazing contributions, friendship and support.