Well what a weekend we had! Great to see our ‘orrible Sergeant back in action on the battlefield. Goodness I had missed his reassuring presence and ‘left, left, left and right and left!’ We also had the honour of Ensign Birtwhistle, who is a direct descendant of the 32nd Ensign at Waterloo. He participated in 2 battles and got a grave insight into what his forbearers experienced.

Painshill is superb landscape gardens with much going on, including a wedding each day; which made stumbling to the loo through the wedding party surprising for both parties. The event was hosted by the 3/95 Rifles and also encompassed a Church School, who came and camped and were thoroughly drilled by the Rifles and Horse Artillery. 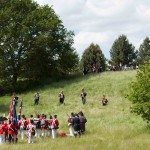 The first day was glorious weather making the battle rather hot work, in which we were sadly defeated by the French. The second day was solid rain, which made the battle a very different experience. The Rocket, Artillery, Pyro and musket smoke hung in the rain sodden air, making it very eerie and atmospheric. The musketry was brisk to ensure the guns kept hot and fired, as they had turned orange in front of our eyes during the Divisional Drill that morning. Funny how weather can be a stimulus, our ‘Wheeling on the March’ worked much better in the rain……seem to remember we learnt how to ‘Wheel on the March’ in the horizontal rain! (Thank you Jerry!) 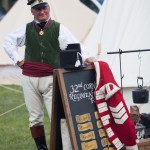 A good turn out of French and Cavalry ensured a very impressive battle to watch. Pvt Jake as usual was in the midst of anything going on, including a Regency dancing display by the Hampshire Regency Dancers, a flash mob dance led by the Royal Horse Artillery girls, rude songs at midnight in the 3/95 camp and the discovery of the biggest hip flask ‘he’ had ever seen; apparently it held THREE bottles of Port! ‘He’ was even on the promotional poster (well, along with other 32nd faces).

Thank you to 3/95 Rifles and A Division for a very different weekend!

(images courtesy of Beeches Images, with thanks)